Using maps and compasses have many applications in math and geography.  It's also a pretty good skill to have if you spend much time in the wild, besides just being a fun thing to practice (once you get the hang of it!).  It helps if you're the kind of person that can visualize the landscape from a set of more-or-less arbitrary symbols (i.e. a map!).

There are two main approaches to using maps and a compass.

The first approach involves a predetermined direction or set of directions.  The second approach involves the discovery of a set of directions.  An example of approach one would be to run a forest inventory grid through an ownership. Or, to find your way from the car to a hunting stand, already marked on a map.  An example of approach two, would be to calculate the area of swamp or a timber sale area.  In either case, you also have to have some way to measure distance while you travel.  For general approximations, a person's pace is a reasonable method, if you know your pace and have had enough practice to make it reliable.  Establishing your pace is discussed below.

Why the Old Technology?

Actually, in most cases, using a GPS (Global Positioning System) unit can be mighty handy.  It has many options.  However, there are a couple of downsides that can give a map and compass an advantage.

1.  Maps and compasses dont have batteries that die (which will almost always happen while youre the farthest away from anything that looks familiar!).

2.  Maps and compasses are a LOT cheaper than a GPS unit.

3.  Compasses can be used under dense forest canopies that will block satellite acquisition from most GPS units.

Going From Point "A" to Point "B"
Measuring An Area in the Landscape
Determining Your Pace
A Note About Compasses
True vs. Magnetic North

This is probably the most common use of a compass.  It assumes that you already know where you are on a map and that you know where (on a map) that you want to go.  You must first discover the azimuth of the line connecting Point "A" and Point "B".  This can be done with a standard map compass or with a protractor.  Once in the field, you set your compass to the pre-determined azimuth and use the compass to maintain your direction until you find Point "B" in the field.

Note:  If you use protractors (cheaper than compasses), you do not have to orient the map.  However, you do need to imagine a 360 degree array beginning from your Point "A".  The protractor can be used to identify which "ray" (in degrees) describes the line from Points "A" to Point "B".  This may involve some addition or subtraction depending upon the protractor design and orientation of your directional line.

5.  Stand at Point "A" in the field (a known place on the map that is easy to find in the field).
6.  Check to be certain that your compass wheel is set to the pre-determined azimuth (azimuth on the wheel is next to the notch in the front of the compass).
7.  Keeping the compass flat and in front of you, turn your body until the magnetic needle is directly above the painted needle.  The compass is now pointing in the direction that you want to go.
8.  Identify something in the distance that is in-line with where the compass is pointing (not in line with the direction the magnetic needle is pointing!).
9.  Walk towards that "something".  Regularly check your compass (step 7) to make sure you are not straying from the pre-determined direction.
10.  Repeat steps 7-9 until you locate Point "B".

Measuring an Area in the Landscape

This is called a "traverse".  Essentially, a series of lines are measured (azimuth and distance) in the field that encloses whatever it is that you want to measure the area for.  Beginning from a known point on a map, look to where you want to go, record the azimuth of that direction before you go, and measure the distance between where you are and the next point.

To measure an azimuth in the field, point the compass in the direction you wish to go.  Without moving the base of the compass, turn the compass wheel until the magnetic arrow is directly above the painted needle.  Read the azimuth next to the notch in the front of the compass.  Walk to the next point, following the azimuth and measuring the distance (often by counting paces, see below).

Continue to record compass "legs" around the area until you return to where you began.

Back in the classroom, use your compass or a protractor to draw the "polygon" onto a map (be aware of the scale of the map!).  The traverse will probably not close exactly.  Not to worry, but the closer the better.   The area of the polygon can be calculated using a "dot grid" or other area measurement devices calibrated to the map scale.

A pace is two steps.  A count of paces should begin with the left foot, and counts made each time the right foot falls.  Every person will have different number of paces in a given distance and different number of feet per pace.  To determine an individual pace, mark a distance of 100 feet (outside or in a long hallway).  Have the students walk the distance several times, counting their paces.  Make sure everyone walks normally, not trying to stretch or shorten their pace.  Average the counts.  Divide that average into 100.  That is how many feet a student's pace is.   As students "pace" distances in field exercises, they simply multiply their pace (distance) by the number of paces they counted.

If long distances need to be "paced", it is easier to count the number of paces in a certain distance, such as a chain or a mile.   For example, an adult may have 1100 paces in one mile.  If they walked a count of 650 paces, then 650 / 1000 would be a distance of 0.59 miles.  More commonly, foresters know their number of paces per chain, which is a land survey unit of 66 feet.  As the forester walks across the landscape, it is fairly easy to measure distance by dividing a pace count by their known number of paces per chain (usually 12 or 13 paces per chain).  Furthermore, foresters know to adjust their pace with changes with topography, in deep snow, on snowshoes, the time of day, and other conditions.  With experience and practice, a walking pace can become a fairly accurate method of distance measurement.

A Note About Compasses

There are many types of compasses.  However, the most useful compass for orienteering consists of a clear plastic rectangular base with a raised wheel containing a magnetic needle.  The wheel can turn.  The outside of the wheel has marks for the 360 degrees of a circle, or more commonly has marks for each two degrees.

Some compass wheels have four circle quadrants, each labeled from 0 to 90 degrees.  This is a bearing compass (image on the left).  Don't use them.   It's too confusing.  Use an azimuth compass, which uses 360 degree labeling. 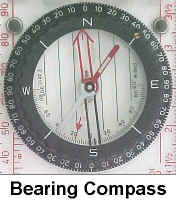 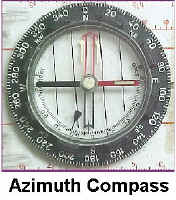 The difference between "true north" and "magnetic north" is called declination.   In Michigan, declination varies from zero (true north equals magnetic north) near Ironwood and Benton Harbor, to about six degrees west in Sault Sainte Marie and Detroit.  Better compasses have a feature where declination can be adjusted to remove the bias of magnetic north.  For most compasses with a built-in declination adjustment, the compass wheel should be turned clockwise (in Michigan).  To make matters more complex, the Earth's magnetic field is not static.   Declination lines change over time.

Lastly, there are local magnetic anomalies that can render compasses next to useless.  Iron ore deposits in parts of the U.P. will make compasses behave erratically.  However, most of the time, it pays to follow the compass even when it doesn't quite seem right.

Return to TOP of  Page