The questions for the "Wooden You Know" game quiz where selected with an educational purpose in mind and not merely forest trivia.   The purpose is to give students a bit of exposure to a few basic Michigan forest characteristics and descriptors.  Each question could launch a discussion about our great forests and generate many subsequent inquiries and explorations. Each question contains a brief background and explanation, and suggests some classroom activities.

The questions are written out for review, with the multiple-choice answer list below each question.  The correct answer is bookmarked to an explanation of the answer.

How much of Michigan is covered with forest?

Forests are always changing. We call that process:

Shade from trees can cool the surrounding area by how much?

Who has the most state-owned forest?

What percentage of Michigan was forested 10,000 years ago?

a. Almost all of Michigan
b. About the same as now
c. There were no forests
d. I don’t know

How many different products in the USA contain wood?

a. soil protection and high water quality
b. wildlife habitat and recreation
c. sawlogs and pulpwood
d. all of the above

What is the primary job of a forester?

The most common tree in Michigan is …

How many vertebrate wildlife species live in Michigan? 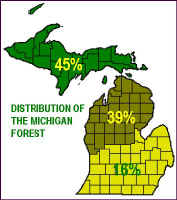 a. about half of Michigan is forested

Most of Michigan was covered with forests when European and early American settlers began moving into the Northwest Territory. Non-forest land included vegetation types such as prairie, open wetlands (marshes), "barrens," rock outcrops, sandblows, dunes, and burned over areas. Burned forest originated both from lightning strikes and from American Indian activity.

Agriculture and cities are the two main causes of deforestation in Michigan. Most of Michigan’s best agricultural areas are in the south, which is why forests did not grow back after initial logging, like they did in the north. Most of Michigan’s human population is also in the southern Lower Peninsula because of the proximity to farmland, milder climate, and its location to major emigration routes from the eastern states.

d. succession is the ecological process that results in constant change in vegetation

Succession is a key concept in understanding forest ecology. It is also fundamental to nearly all of our forest management systems. Succession is the orderly, often predictable, change in vegetation over time. Forests are dynamic systems. When we think of forests, we should always keep in mind the impact of succession on a particular piece of forest. An appreciation of this temporal element will provide a clearer understanding for forest systems, including wildlife habitat, water quality, soil conditions, and visual quality. Succession is treated in greater detail in the Environment Section of this Teachers Guide.

b. 10 degrees is how much shade trees can cool the surrounding area

Ten degrees may not always sound like a lot, but just the effect on reducing summer cooling costs is "tree-mendous". Trees in urban and residential areas and parks provide welcome shade on those hot summer days. We tend to think of the cooling effect of shade only in human terms, but there are also significant ecological impacts of cooler and moister microclimates. Many species of plants and animals are influenced by microclimates created under trees and forest canopies. 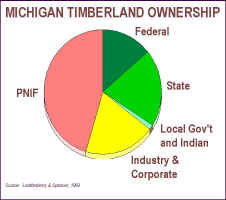 At about 3.5 million acres, Michigan has the second largest amount of state-owned "timberland" in the USA, behind only Alaska (4.6 million acres). "Timberland" is a little different than "forest land", according to inventory terms used by the U.S. Forest Service.  Timberland is forest area where timber harvest is not restricted by law, regulation, or policy.  Also, timberland meets minimum growth rates.  These are both important distinctions when we think about what constitutes a forest.

Ownership strongly influences how a forest will be managed, or not managed. Public forests are managed by government agencies with many primary objectives. Industrial forests are managed with wood production as the main objective. There are over 350,000 private, non-industrial forest owners in Michigan, with just about every conceivable set of objectives imaginable. In Michigan, much of the tax delinquent land of the 1920s and 1930s went into state ownership. In Wisconsin and Minnesota, much of these lands went into County ownership. This ownership legacy has influenced the character of forest management differently in Michigan.

c. There were no forests because glaciers covered what is now Michigan

Forest coverage has varied over the millennia. How much of present-day Michigan was forested 10,000 years ago? None! There wasn’t a single tree in all of Michigan. Why? Because the land was under the glaciers at the time. Since glaciation, Michigan has undergone various periods of warm, dry conditions and cool, wet conditions. At one time, a great deal of Michigan was covered with prairie vegetation! Forest composition of tree and other plant species has changed many times with climate changes.

The important lesson in this question is that forests are constantly changing from both natural cycles, succession, and human impact. Forests have always adapted and will continue to do so.

c. Over 5,000 different products contain wood or materials from wood

According to the Temperate Forest Foundation, over 5000 products are made from trees. Their website (http://www.forestinfo.org/Discover/fromtree.htm) lists almost 900 items (with several redundancies). The point is that hundreds of things that we use  have trees in their manufacturing. Some products are easy to associate with wood, such as lumber and paper. Other items, such as toothpaste, cosmetics, clothing, and food additives are less obvious. The biggest advantage of using wood in products is the fact that wood is renewable, the only major raw material that can make that claim.

d. all of the above are results of well-managed forests

Naturally, all the items listed above, and other outputs as well, are part of forest management. Forest management addresses more than just timber, although timber is a major component of most forest management systems. The balance of outputs on a particular tract of land, ownership, or individual forest stand may vary considerably. However, in the big picture (or landscape or ecosystem perspective) the goal is to incorporate a reasonable balance of all the demands of society on forests.

More about multiple use and forest management systems.

c. Balance the various benefits and products from the forest is the primary focus of a forester

This is an extension of the previous question, but assigns the responsibility of forest management to foresters. However, foresters may not be the only natural resource professionals involved with forestry. Often wildlife biologists, hydrologists, soil scientists, botanists, archeologists, and others work with foresters to manage forests. The forestry profession focuses primarily on trees and forest ecology, but also addresses disciplines associated with forests because a forest is more than trees. The Balance Section covers careers in forestry more in depth. 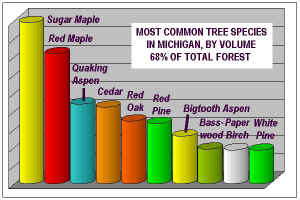 b. Sugar Maple is the most common tree in Michigan

This is one of the questions most often asked by students. Sugar maple is the most common tree in Michigan, and this tells us quite a bit about the condition of our forests. Sugar maple is a shade-tolerant species that can reproduce in the shade of most forest canopies. The increasing abundance of sugar maple suggests that our forests are growing older and moving towards the later end of forest succession. Succession is reviewed in the Tree Basics Section of this Guide.

The "most common" tree species begs for a method of measurement. Are we talking about the number of trees, the volume of wood, or some other measure? Do we include the seedlings and saplings? If not, what is the minimum size that we will measure? These are good science-based and critical thinking questions to get creative minds going. Foresters and ecologists would typically look at the "biomass" of a species. Volume is generally used as surrogate for biomass.

a. About 575 vertebrate species live in Michigan

About 575 species of vertebrate wildlife can be found in Michigan!  These include birds, fish, mammals, amphibians, and reptiles. Most of these species are dependent upon forests for good habitat conditions, even the fish because forests are critical to the maintenance of high water quality. It is probably impossible to identify and catalog all species of wildlife if other taxa are included.

As wildlife topics are introduced to students, it is important to emphasize the diversity of species and not focus exclusively on game species, endangered species, or other species group of particular interest. It is also important to understand that each species has a particular set of habitat requirements and preferences. However, wildlife can be classified according to their use of particular habitat types. Because species management is often a difficult and expensive task, habitat types are often managed for diversity with the assumption that this will generate a diversity of wildlife species. More forest habitat manipulation has occurred through forestry operations than any other human activity, so foresters are increasingly cognizant of their effect upon wildlife.